Traditional vs Digital Marketing: Which is Better? 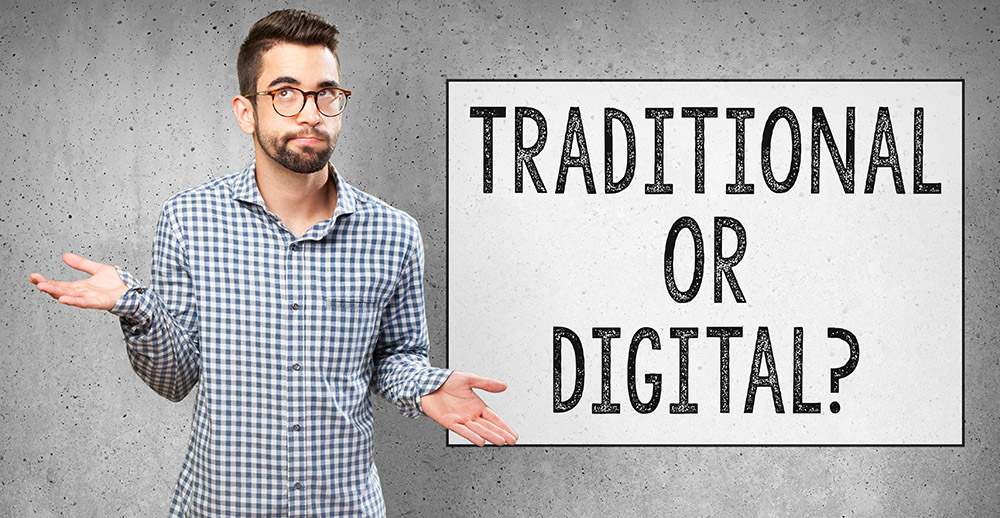 Over the past 25 years, the use of traditional marketing has suffered a steep decline while the digital world has expanded into every facet of our daily lives. But does that make digital marketing better than traditional? Not necessarily.

The internet changed marketing in one major way; It created an entirely new world, the virtual world. Digital marketing continues to rapidly evolve with technology, yet much of it has been around for many years:

Comparing Traditional and Digital Marketing: Is One Better Than the Other?

Broadcast media and billboards have the ability to reach a larger local audience, therefore casting a wider net. Newspapers and magazines are viewed as credible sources of information for targeted audiences. Printed material, such as direct mail, gives people a hard copy which leads to multiple impressions that last much longer.

Regardless of location, websites and social media can reach a global audience. It can also target audiences with near perfect precision. Tailored content to drive more engagement. Digital is more cost-effective and measuring the return on investment is easier to calculate.

There is a major “knowledge curve” with regard to digital marketing. It takes a lot of research and time to understand what works and what doesn’t. Outside help is often necessary. Search engines are the gatekeepers of information, which makes it difficult and expensive to get in front of potential customers. Because it’s so precise, it’s much more difficult to cast a wider net to local audiences.

Who Is The Audience?

A recent case study of two furniture retailers found the advantages and disadvantages of both forms of marketing to be true. One retailer in the study used primarily traditional methods to advertise, while the other focused on digital. Both were successful and had similar overall returns on their investment, but in different ways: new customers and repeat customers.

Traditional marketing brought more people to the showroom and almost twice as many new customers to the store. Whereas digital marketing engaged with repeat customers and had a much higher close rate on sales for that group.

For retailers looking to bring in new customers, traditional marketing has a broader reach and captures more attention than digital. But, if retailers want to engage more with the customers they have, which tend to be the most profitable, they need to focus on their digital marketing efforts. The conclusion from this study is that a strategic mix of both will bring in the highest returns.